In this article, i am going to develop simple NodeJs application that uses following technologies.

Initializing the project and creating the package.json file.

The following command can be used to  create the package.json file with required intial configurations.

Once the npm init command is executed, you need to provide the project related details for the package.json. Please refer the below screenshot. 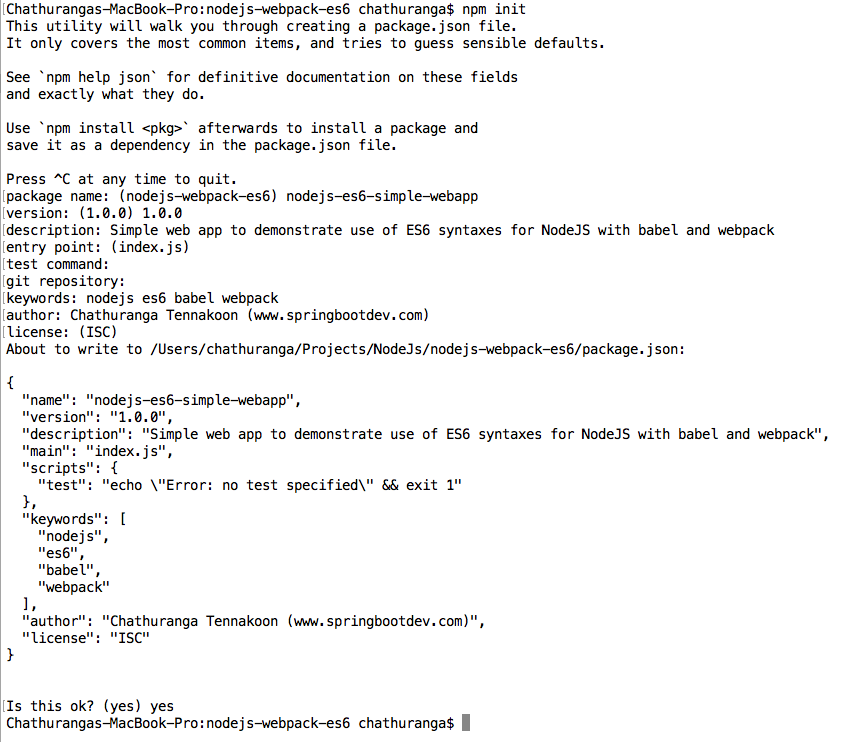 Now the package.json is created and we can start the development of our NodeJs application.

The final project structure should looks like below.  Don’t worry at the moment. we will add each of files while we are moving forward with the article. 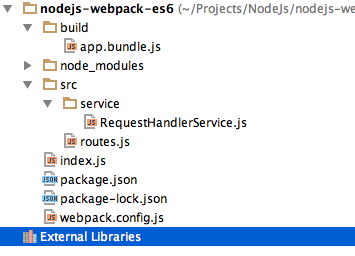 Adding the external libraries and dependencies for the project.

As i have already pointed out, our NodeJs application depends on few external dependencies and  they can be listed as below.

We will move forward on installing each of these dependencies.

Express.js is a web application framework for NodeJs. It has set of utility methods that simplifies the development of  the NodeJs applications.  Express.js is not bundled with NodeJs installation and we need to install it separately. It can be done with following command.

After executing above command, you can see that ExpressJs  has been added to the dependencies list of the package.json file.

If you want to learn more about babel or webpack, please click here to visit article i have written on babel with Webpack.

Once the above command is executed successfully, you can see that the babel dependencies are installed under the devDependencies of the package.json

So we will be moving forward with setting up webpack. First we need to install the webpack dependencies for the project and there are two dependencies required.

These dependencies can be installed with following command.

So once the dependencies are installed, we need to create a webpack.config.js file and do the necessary configuration for the webpack.

–save  : This will create a dependency entry under the dependencies of the package.json

–save-dev  : This will create a dependency entry under the devDependencies of the package.json

Once all the required dependencies are installed, the package.json of the project should looks like below. (This is just a sample snapshot of package.json and the versions of the dependencies can be different)

Lets look at each source file in detailed.

create an index.js file in the root of your project.  The file should contains the following source.

As you can see that we are using the ES6 based import here instead of ES5 based require. If you observe most of the source code in this project, you will notice that we have used ES6+ based syntaxes most of the places.

This class hans been added demonstrate the robust features of ES6+ (Just to show the beauty of ES6+). This class will contain a simple method of handling HTTP request.

This method has been annotated with async. Therefore it guarantees that the method will return a promise.

This file will contains the all the HTTP Route handlers related to this project. I am not going to explain all the route handlers here. I will just describe few of them for your understanding.

Lets look at some of the selected routes in detailed.  If you want to learn more about ExpressJS routing, it is recommended to read http://expressjs.com/en/guide/routing.html

There is a special routing method, app.all(), used to load middleware functions at a path for all HTTP request methods. For example, the above handler is executed for requests to the route “/*” (for any route) with HTTP GET, POST, PUT, DELETE, or any other HTTP request method supported.

next() will delegate the request to the next available middleware or route.

handleHttpRequest (Async method)  of the RequestHandlerService has been invoked in this route handler. Since the route handler function(arrow function) is modified with async keyword,it is possible to use the await keyword to wait for the result from the method invocation.

If you observe the last line of the file, you can see that we have export the module router. So the outside script can use this module.

Using webpack, running/traspiling your JavaScript and JSX through Babel is a simple as adding the babel-loader to your webpack.config.js. It has been added as a loader and it will go through all js and JSX files. It uses the babel-preset-env as defined and excludes the files in the node_modules directory.

babel-polyfill will be added and managed by the webpack. In addition, index.js has been designated as a entry point js file for the project.

The output file will be stored in the build directory using file app.bundles.js.

Testing and Running the application.

Now we have come to the final section of our article. Here we will run the nodeJs application and test each application route.  In oder to run the application , we need to transpile the ES6+ syntaxes of the project into the ES5.

Transpiling/Compiling ES6+ syntaxes into ES5 with Babel and Webpack

Now we need to transpile/convert the ES6+ based source code into ES5 based source. This can be done with babel. In this project we use webpack to execute babel using babel-loader for the source code transpiling.  In oder to achieve this, go to the root of the project where your webpack.config.js is located.  Then run the following command to build the project.

Then you can see that project is build and final file is created in build/app.bundle.js. This is the file that should be run with node.

Once the above command is executed, it will create a web server and up the NodeJs project. please refer the below screenshot.

You can see that server is up and application listen on port 2000 for incoming  HTTP requests.

Executing both transpiling and running commands with NPM

We can combine both commands together and add a new command under the scripts of the package.json

Now you can run following command to build and run the project. It will first build the project with webpack and then run the build file with node.

Now lets access each HTTP route with postman as follows.

How to set up the project clone from GitHub

The source code has been added without the node_modules directory. Therefore run the following command to install the required dependencies for the project. This will install the dependencies locally for your project.

After that you can run project with following command.

This is the end of the article. If you have any concern or need any help, feel free to contact me.